About 50 km southwest from Punta Cana -lies The Parque Nacional Del Este (or National Park of the East). Here tourists can experience a real jungle excursion. The park consists 31,244 Ha of open space on the southeastern peninsula of Hispaniola and 10,650 Ha on Isla Saona. While the Saona island is a popular tourist destinations significantly less people come to visit the peninsula. 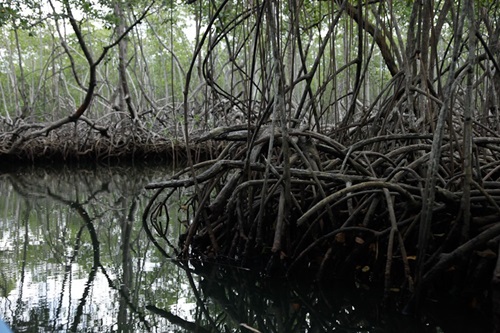 During this excursion one can experience the various parts of the park: the dense dry jungle, the fauna and flora. Visitors also have the opportunity to learn the story of the native people that lived here for centuries.

The majority of Hispaniola’s mammals are represented within he Parque Nacional Del Este. The Hispaniolan solenodon, a small, shrew-like mammal, and the hutia, a large rodent, are both endemic to the Caribbean and threatened with extinction. In addition, there are rhinoceros iguanas, six species of snakes, ten species of lizards, and three species of crabs.

Before you set on a jungle tour from Punta Cana you want to make sure that you really are going to  jungle and not on a tour that is called jungle tours but not really taking you in the real jungle and showing you animals in cages instead.

Seavis is one of the companies that will take you on a more real jungle trip. Their trips take about 8 hours and include 90 minute hike that is not too difficult, but participants must be able to walk on uneven surface without problems. The cost for adult is around US$85 and does not include price of transfer from Punta Cana (additional US$ 25)

Outback Jungle Safari is a company that takes tourists on more relaxing “jungle trips” in their orange trucks. During these tours you will not go deep in the jungle but you will visit traditional household, chocolate plantation and see native animals like crocodiles, iguanas and turtles. The cost for a full day tour is about US$85.