Whale watching season in Punta Cana runs from January 15th and can least until the end of March. The best place to see whales in the Dominican Republic however is Samana about 5-6 hours north of Punta Cana. 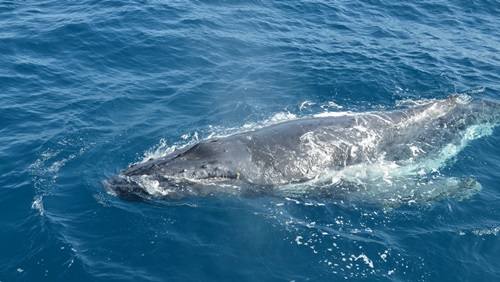 During the season if the whales are passing by, your resort might organize a tour to see the whales or you might even be lucky to see them in front of your hotel. For the best experience however a trip to Samaná is recommend.

Each winter Humpbacks migrate (anywhere from 2000 to 4000 miles) from distant northern feeding grounds in the the east coast of Canada, Greenland and Iceland to the warm Caribbean waters of the Dominican Republic to reproduce.

Pregnant females give birth and nurture their offspring, preparing their calves for the long return journey north and adolescent Humpbacks learn by example their future reproductive roles.

Humpback whales are a whale watchers delight. They are coastal whales  and are considered one of the most active species of whale in the world. They do have  an amazing repertoire of behaviors some of which are unique to the reproductive end of their annual migration. The lonely, haunting song of the solitary male Humpback can be heard in Samaná Bay waters and groups of males aggressively compete for the right to escort eligible females.

The easiest way to see the whales in Samana is to find an organised tour through your hotel or resort. These tours go to Samana by bus or by a smallish plane. Either way the tour will take the whole day. Prices start at around US$ 150 per person when going by bus.

These companies can take you whale watching in Samana:

More information about whale watching in Samana can be found at Center for Conservation and Eco-Development Samaná.

There is also a tour leaving from Mitches near Punta Cana going by a catamaran to Samana.